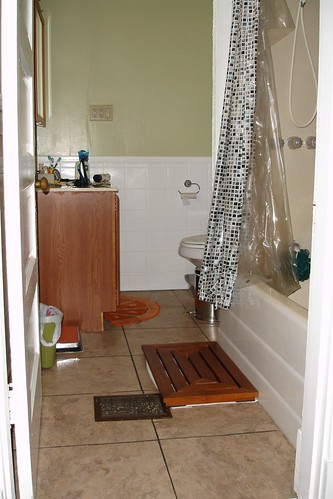 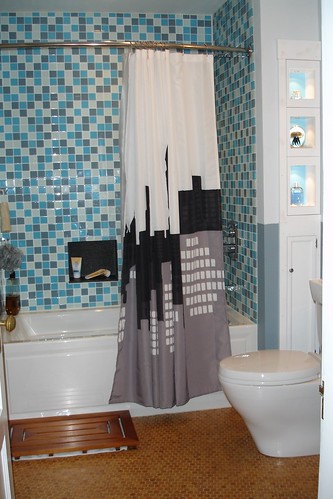 Quite a dramatic difference, if I do say so myself. And off to the right in the “after” photo is the reveal of what I’ve been working on for quite a while… the last of the built-ins. We decided to use drawers in this space to maximize use of such a narrow but deep space. Instead of boring plain fronts, though, I built open niches in the front, with a side-accessible drawer in the back.

As an added bonus, each of the niches has an LED spotlight in it. Initially, the intent was to have some nice accent lighting in the bathroom, but the niche lights have also turned out to make a rather nice nightlight (being LEDs, each lamp only uses 1 watt). The biggest challenge here was getting power to the lamps while still allowing the drawers to function. Fortunately, the LEDs are low voltage, and use a nice thin conductor. My original plan had been to build a hinged cable arm, much like is sometimes used in sever rooms. After quite a bit of digging around, I found a manufacturer of cable chains that produces them in some fairly small sizes, which turned out to be the perfect solution. The cable for each lamp runs from the fixture, along the back side of the drawer (which is against the wall, so it’s hidden), to the rear of the drawer, where it enters the cable chain. The chain then makes a loop back and attaches to the cabinet near the front. This gives plenty of slack in the chain for the drawer to move freely from closed to fully extended, while cleanly guiding the cable. And without actually removing a drawer, all of the mechanism is completely hidden from view. 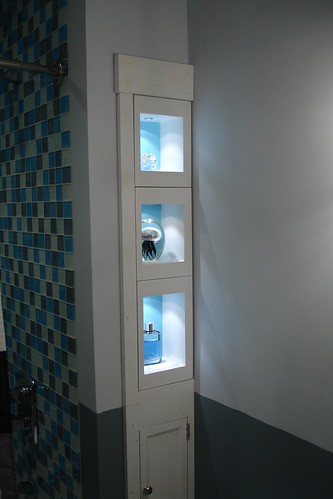 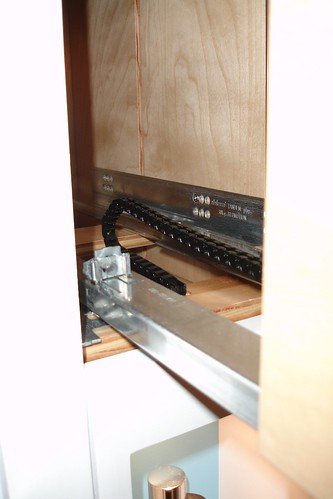 This entry was posted 10 years, 2 months ago. and is filed under Bathroom Remodel, Home Ownership. You can follow any responses to this entry through the RSS 2.0 feed. Both comments and pings are currently closed.