It didn’t take long for me to get the first of the shop projects done. This one was a Thien cyclone dust separator – sort of a scaled-up version of the cyclone technology in those expensive British vacuums. In the shop, I’ll be using it to separate out a good portion of the sawdust and wood shavings before it reaches the vacuum and clogs it. Since I built mine on a 30-gallon steel trash can, it can hold quite a bit more stuff than my shop vac. 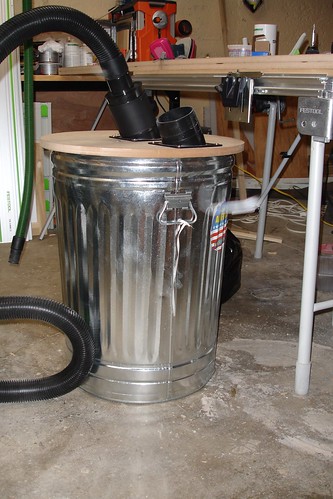 I just followed the instructions on J. Phil Thien’s site (above) and forums, so I won’t go into too much detail. The two main components are cut from MDF using a homemade trammel to get nice round circles. I used some 1/2″ PVC pipe as spacers between the lid and the baffle and attached the 4″ PVC fittings with a healthy amount of epoxy (my new favorite toy!). 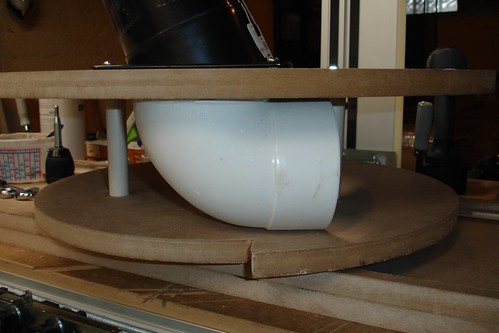 To test it out, I ran a bunch of pine through the planer to generate a lot of shavings. It needs a little bit of tweaking, but I’m still quite impressed with the results. Until I overfilled it, the cyclone did a reasonably good job of separating the shavings and dust out of the air. And even with the trash can filled, the shop vac only sucked up a comparatively small amount of debris. 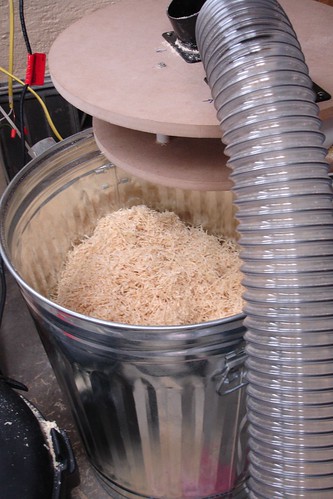 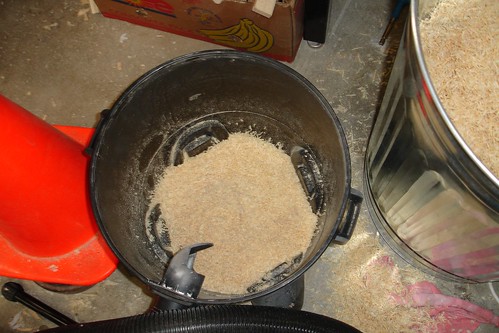 I suspect it will perform much better once I have it hooked to a proper dust extractor (most likely one from Harbor Fright [sic]), instead of the smaller shop vac that I’m using with it now. Even still, it’s an exciting addition to the shop. I have a number of projects I’ve been delaying, because they involved quite a bit of planing. Before I built the separator, I had to send all that debris straight into the shop vac, clogging it up after a just a pass or two. Frustrating, to say the least.

And more exciting still, this opens the way for the next few projects. In fact, that pine I was running through the planer is for the very next one!

This entry was posted 11 years, 0 months ago. and is filed under Setting up shop, Wood butchery. You can follow any responses to this entry through the RSS 2.0 feed. Both comments and pings are currently closed.