Yesterday evening marked the official start of the project, and my friend Jeremy came over to help with more demolition. We very easily removed the vanity, and the shower partition wall, which left just one more thing… the tub. A cast iron beast, original to the house, and far too heavy to remove in one piece. So several hours with a sledgehammer later… 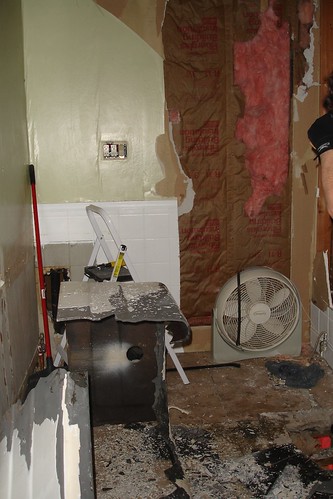 It took about three hours total to get it broken into small enough pieces to carry out, and made a HUGE mess. But was actually a lot less work than I’d expected. 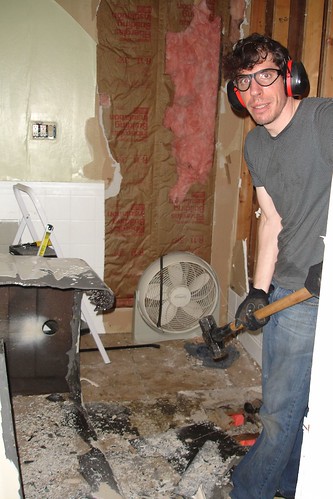 Brad poses for a victory shot

Now with the tub gone, there’s a big gaping hole down to the kitchen, and we can see the original finishes in the bathroom… 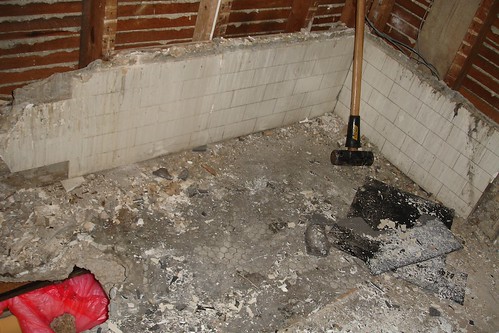 It’s tough to make out the floor, since it’s so dirty, but that’s some 95-year-old hex mosaic tile, still in remarkably good condition. And on the wall is the same vintage subway tile. I’m going to try to salvage those and donate them to the local architectural salve place, since almost all of them are completely in tact.

Funny thing is that if the rest of the bathroom had still had decent finishes like that, I wouldn’t have been so inclined to rip it out. But what fun would that be?

This entry was posted 12 years, 4 months ago. and is filed under Bathroom Remodel, Various & Sundry. You can follow any responses to this entry through the RSS 2.0 feed. Both comments and pings are currently closed.