While installing the cupboard latches for the built-ins, I have so far snapped off three screw heads. The first two times were during the dry assembly, before everything was painted or in place, so it wasn’t a big ordeal. This most recent time, however, was after the face frame had been secured in place. Luckily, the experience from the first two times made it easier to come up with a strategy… 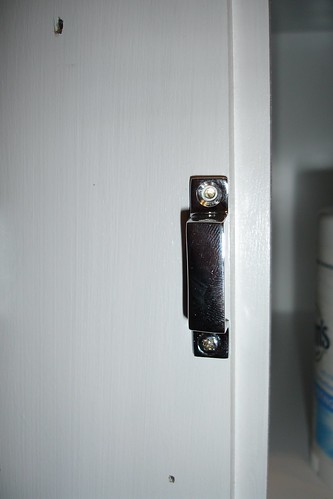 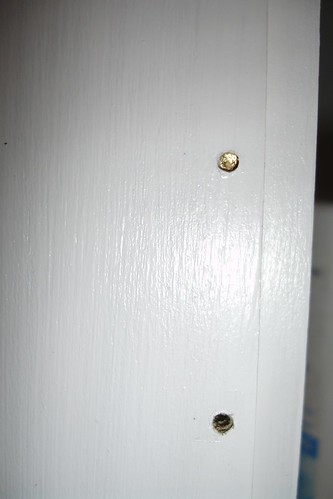 Since the shaft of the screw is firmly in the hole, and I’m not aware of any screw removal aids for screws this small, the fix for the problem involves making things worse. Using a small-ish drill bit, I drilled a series of holes around the screw, being careful not to drill too far. The goal is to get enough space around the screw so that I can reach in with some needle-nose pliers and back it out. And part of the trick is using the right size of drill bit… to big, and it’ll just make patching things up more difficult; too small, and the bit will likely break off, only adding to the problem (I learned that the hard way). 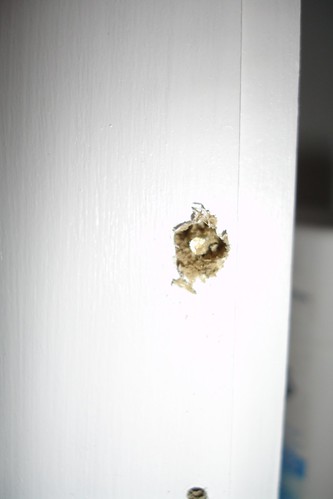 With the series of holes complete, it was a pretty trivial matter to reach in with the pliers and unscrew the problem. Then a quick sanding to clean up the rough surface of the hole, and it’s ready for repairs. 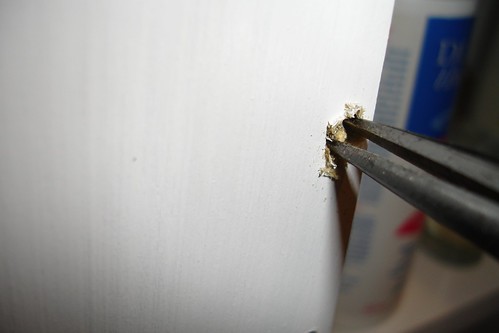 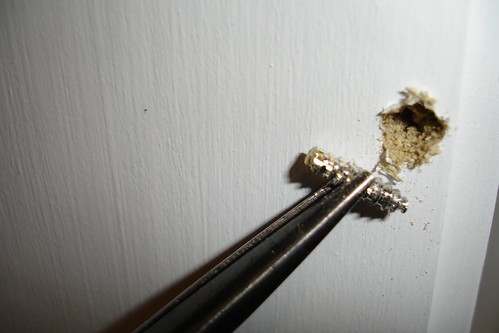 I’ve had great success using a slow-curing two-part epoxy for the previous repairs. By adding a sandable fairing filler to the mix, it’s thick enough to not make a mess, and also easy enough to work and sand down any excess once cured. I also had two other small projects that I needed to tackle with the epoxy, so this seemed like the perfect chance.

The first was to fix a problem with one of the doors. Somehow, the side stiles of the door are not in the same plane as the top and bottom rails, and so the door effectively has a concave shape. Since the cupboard latch mounts to the stile, that concavity ends up putting it at an odd angle where it won’t actually latch, so I need to either repair the door or just scrap it and build another. I’m not in the mood to spend the time building another door, so I figure the repair is worth a shot – even if it fails, I’m no worse off.

Getting started with this fix involved cutting some small relief cuts on the back of the door where the rails and stiles meet. I had thought about using the circular saw to do this, but decided to go for a less invasive technique instead. Using a Japanese Dozuki saw (my Christmas gift to myself), I cut four very narrow relief cuts. 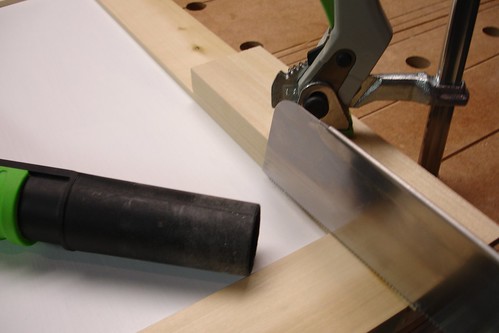 With that little bit of material removed, it was now possible to apply some pressure and flatten out the door. Naturally, it still springs right back into the concave shape when the pressure is removed, but we’ll hopefully take care of that. 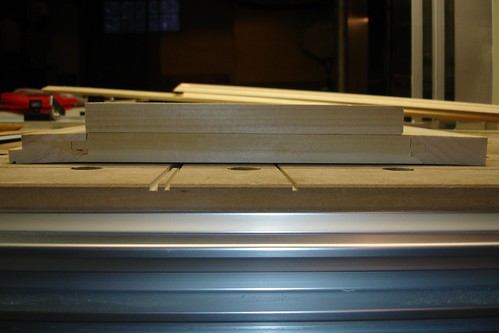 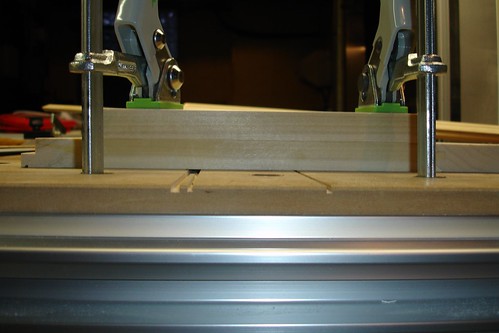 I then masked off the areas around the cuts to prevent the epoxy from flowing out the sides. I also put some clear packing tape on two pieces of scrap that I will use when clamping. The tape will hopefully prevent the scrap from becoming adhered to the door, since that wouldn’t be very useful. 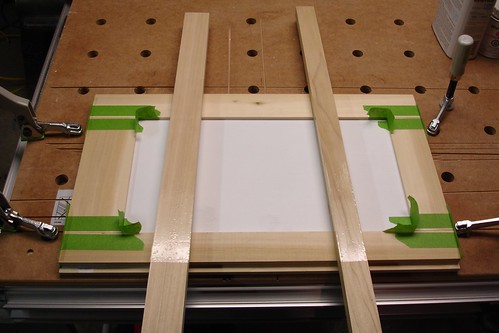 The other bit of epoxy fun is to fill in the screw holes for the hinges on the door. We are replacing the old hinges with new ones, and unfortunately, the new screws are smaller and don’t grab at all in the existing holes. But it’s easy enough to fill them up with epoxy and then drill some new pilot holes.

The epoxy that I used is from West Systems. I’m using the 105 resin with the 206 slow hardener to give me a bit of extra time, and the 410 Microlight fairing filler to make any sanding I need to do that much easier. The filler does reduce the strength of the epoxy, but since none of these are high-load locations, I’m not too concerned. 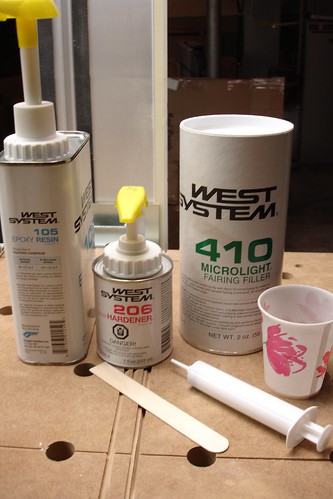 Getting the epoxy ready just involves mixing one pump each of the resin and hardener for at least a minute. You can actually see swirls in the mix when you first get started, but they disappear as things come together. 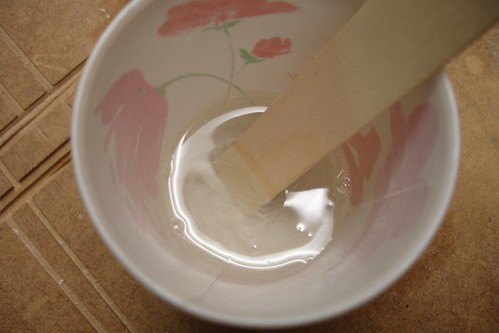 The epoxy is quite usable at this point, but since I want some sandability, I added in a little bit of the filler. The filler is an amazingly light material; the entire canister weighs only two ounces! It also adds quite a bit of volume to the epoxy as you work more in, as well as making it thicker. 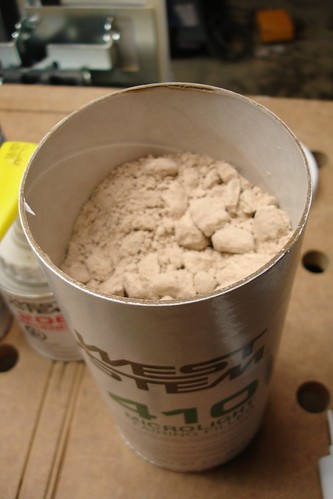 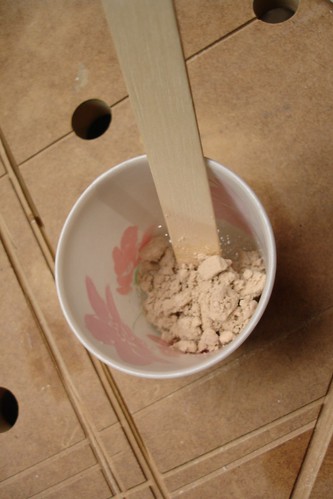 The first task was filling the screw holes in the door, which I propped upright so the holes are facing straight up. That let me use a syringe to inject the mixture straight into the holes, which meant I could use a fairly thin mix for this part. And that’s actually a big advantage, since it will just flow down into the holes on its own. 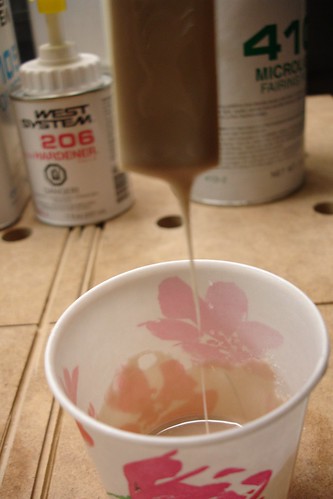 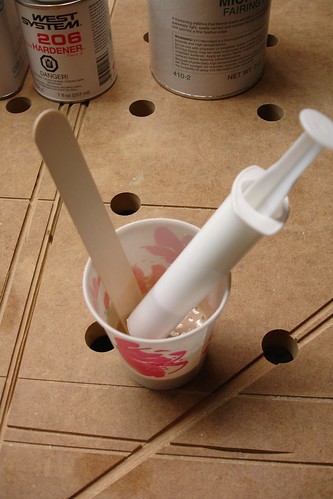 The first round of filling was a pretty trivial matter of going from hole to hole and filling them up with epoxy. 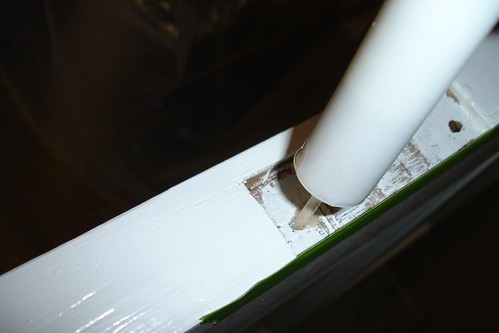 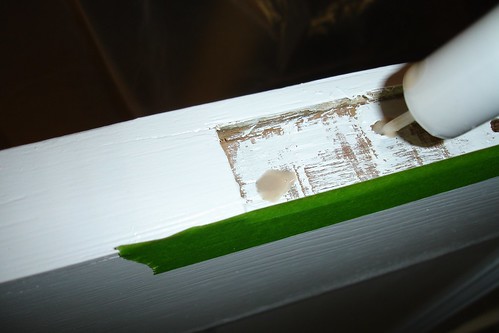 I then let the mixture settle in for a minute or so, and also tapped the door with a hammer a few times to knock out any air bubbles. What had previously been fully filled holes were all back down to about half full, so it was time for another round of epoxy to top things off. 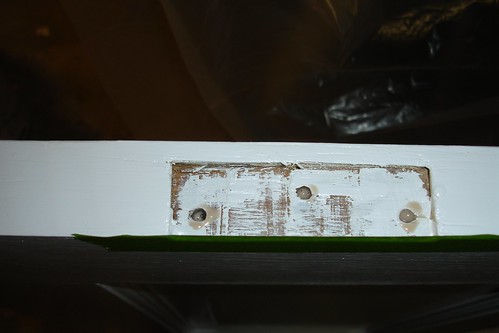 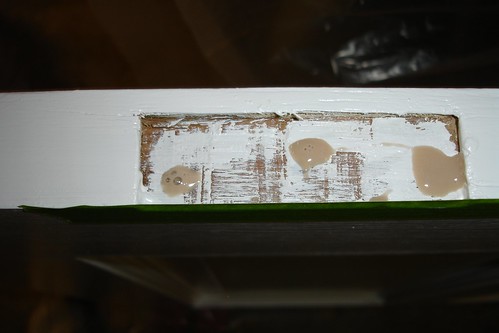 The next task was to fill the relief cuts on the cabinet door to try to hold it into place. While I didn’t want to use the same runny epoxy I used on the big door, for fear of it running everywhere, I also didn’t want too thick of a mixture, since that wouldn’t be as strong. I added another bit of filler to the mix and came up with some epoxy that dripped slowly off of the scraper. 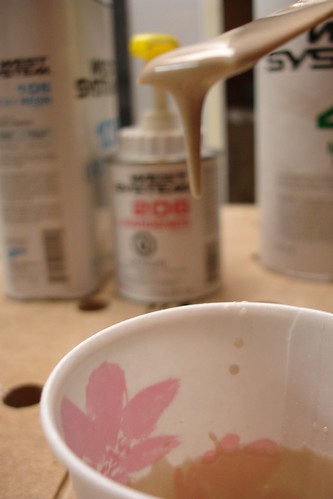 I dribbled a liberal amount of epoxy on each of the four cuts, and gave it a minute or so to flow down into place. I also tapped it against the table top to try to help things settle in a bit. Then I went back over each joint with the scraper, pushing in as much epoxy as I could, then scraping off the excess. 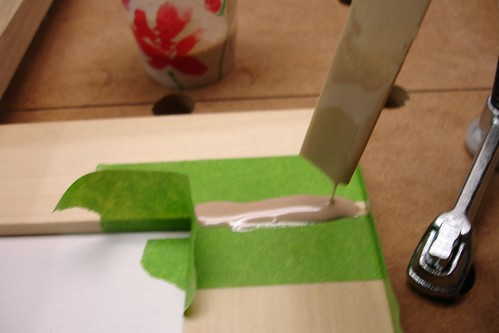 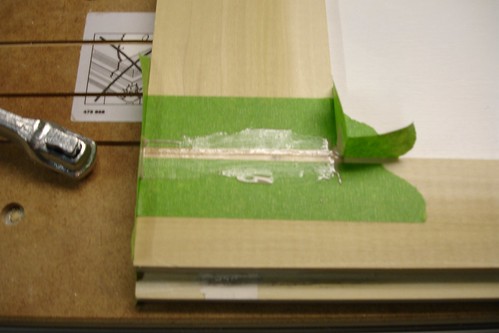 Then it was just a matter of putting my scrap pieces in place on each end, and clamping the whole thing flat. 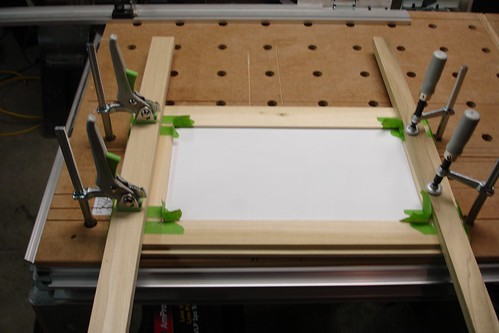 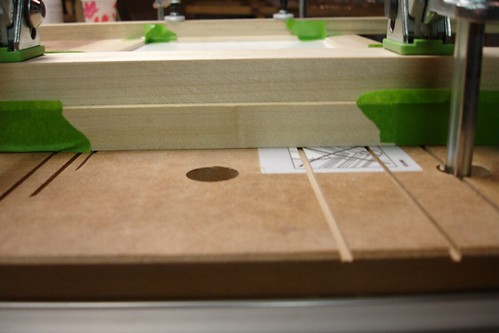 The final task was to go back to the screw hole that started this all. Since the hole is in the face frame, which is mounted vertically, I need a much stiffer mixture to keep it from just running out everywhere and making a mess. I added in a bit more filler, and wound up with something between marshmallow fluff and peanut butter. And around the same color as a combination of the two, as well. 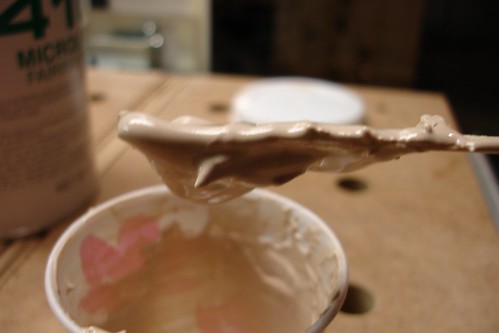 With the screw hole masked off, I worked the epoxy in a little bit at a time, trying to make sure there weren’t any big voids or bubbles behind the surface. 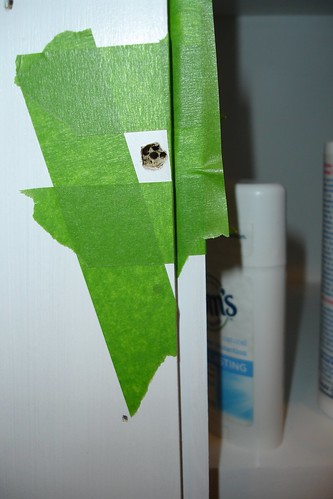 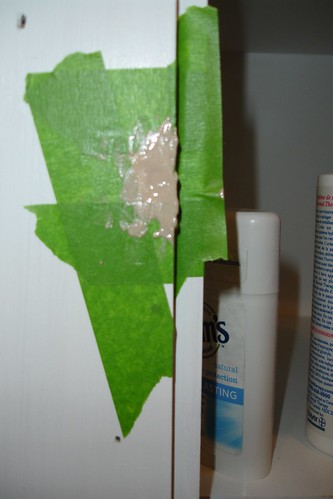 The slow curing hardener takes 1-4 days to reach full strength, so we have a bit of time to wait before we see the final results. I’m quite confident in the two screw hole filling tasks, since both are things I’ve done before. I’m not so sure about the repair attempt on the cabinet door, so I’ll be curious to see how things turned out when I get to remove the clamps. Stay tuned…

This entry was posted 11 years, 8 months ago. and is filed under Bathroom Remodel, Home Ownership, Wood butchery. You can follow any responses to this entry through the RSS 2.0 feed. Both comments and pings are currently closed.