This week has been fairly quiet on updates, since most of the work has been pretty unremarkable. My brother came for a visit on Sunday to help us get started taping and mudding the drywall, and I spent the next few days finishing that off. Once that was satisfactory (not perfect, but good enough), I skim-coated the walls with joint compound, followed by two coats of vapor barrier primer. Since we used moisture-resistant drywall, we had to skip the vapor barrier directly against the insulation and use the special primer instead. A few extra steps, but worth it. Then, the painting… 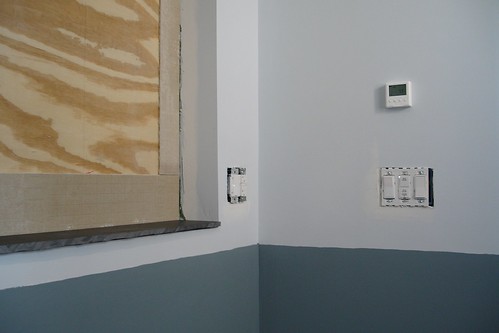 I started on the ceiling, with two coats of white paint. Fortunately, the paint that I’m using dries incredibly quickly (so much so that you can actually see it dry!), so I only had to wait an hour between coats. We’re going with a two-tone paint scheme, with chair rail in between, so the next step was painting the upper two-thirds of the walls. Those two coats took considerably more time, since there was a tremendous amount of cutting-in to do. That was followed today by two coats of paint for the lower third of the walls, a process that went MUCH quicker (fewer obstacles). All-in-all, eight separate applications of paint/primer. At least it looks even better than I’d expected.

With all of the painting done, I was able to start installing some of the more basic trim, including the trim kits for the recessed lights and exhaust fan. I started to install the cover plates for the light switches, but discovered that I’d made a mistake when mudding the drywall, and hadn’t closed in the boxes enough. So I had to pull back out the joint compound, and it will be a few more days of getting those properly surrounded so there won’t be any big gaps. 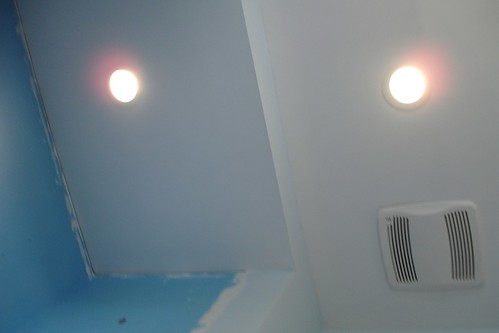 I also spent some time today installing the thermostat for the radiant floor. I still have some work to do in the basement on getting everything hooked up for the controls, as well as all of the plumbing for the heat, but at least the thermostat is powered and connected to the floor sensor. It’s interesting to look at the two temperatures throughout the day and see how they vary. In the morning, the floor was colder than the room; now in the evening, it’s reversed. I apparently snapped these pictures right as they converged. 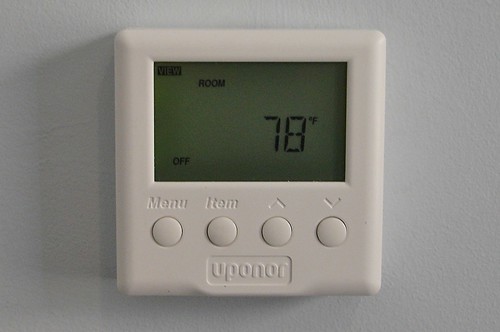 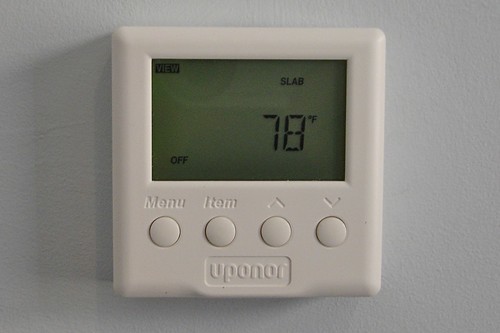 The big exciting task for today was cutting and installing the slate for the niches. I used the templates I made earlier to cut the various pieces out on the wet saw. Once they were cut and test-fitted (which you can see in the photo near the top and below), Brad spent some time with the tile stone smoothing down the exposed edges. That left some pretty big scratch marks, so we used some 120-grit paper in the sander to clean things up. We also used the same paper on the slate for the mirror niche to smooth out some scratches in the surface. Even still, we actually left some of the scratches, partly because it is the character of salvaged material, and partly because we didn’t want to loose the natural texture in that spot. 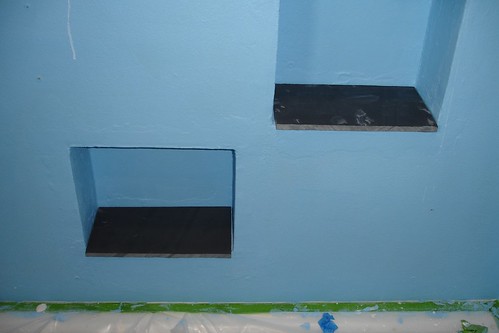 I then spread some thinset in each niche and back-buttered each piece of slate, since they are irregular. Once they were set in, I did a quick check for level from side-to-side, and made sure they were all pitched slightly lower in the front, so any water will flow out. Once they’ve set up by morning, we’ll give them a good cleaning, followed by a coat of sealer. Then we’ll be able to start installing the rest of the tile in the niches, and then on to the shower surround! It won’t be long now…