We can rebuild it. We have the technology.

After a much deserved break on Monday, Tuesday marked the start of putting things back together and adding in the new. Brad got up on the roof bright and early to install the roof cap for the bathroom fan. Since I still can’t bring myself to get on the roof, I watched from the ground. 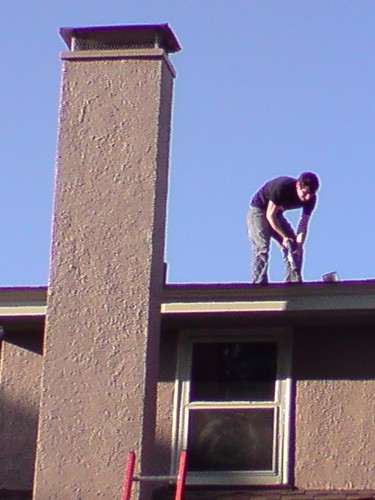 Since the top of every existing floor joist had been beveled to accommodate the mud job, we had to sister in new floor joists. That meant removing the knob-and-tube wiring snaking its way through the existing ones. And it turns out that that circuit supplied half the house (no joke; there’s only one working light upstairs right now). After much finagling, and a bit of modification in spots with the router, we were able to get all of the sistered joists in place. 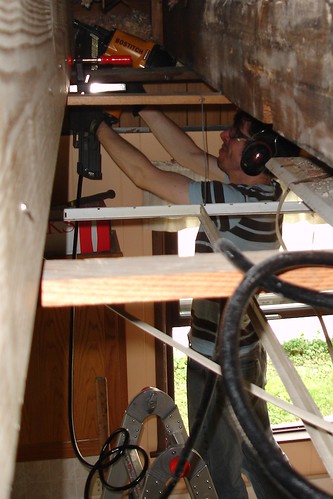 I spent the rest of Wednesday getting the lower half of the new drain stack pieced together. Right now, it is being held up by a stepladder in the basement, waiting to be raised into place and hooked up. 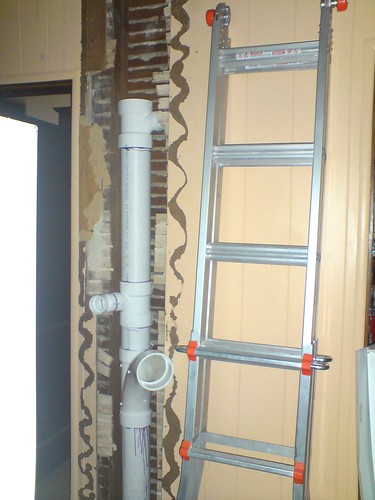 Most of today was spent cutting and fitting blocking to give the floor and joists a bit of extra support. It was very tedious work, since we had to rough cut each piece, then scribe and transfer lines for the exact angles needed to fit in between the not-quite-square joists. But it did give Brad some good quality time with the circular saw. 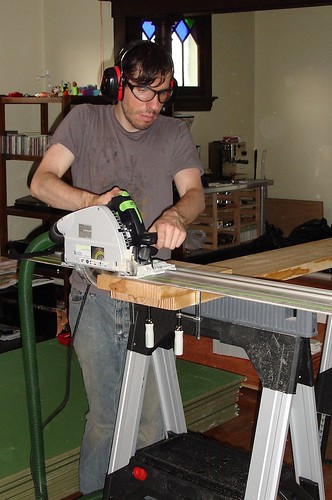 With all of the blocking in place, we were finally able to get the first piece of subfloor in place! It went in relatively smoothly, with only a few notches being necessary to work around some rougher framing in the corners of the room. I got to make good use of the depth-stop chuck for my new drill, which made driving all the screws incredibly easy. 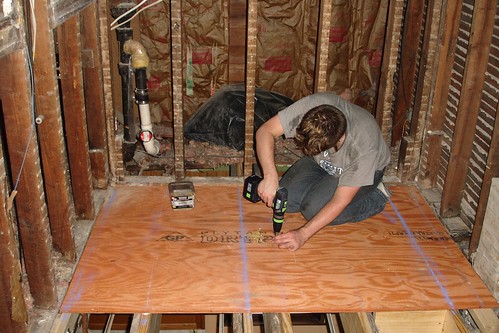 I also got to try out the pneumatic caulk gun, which was a genuine treat, and made quick work of two tubes of subfloor adhesive. I think I managed to put enough down, given how much squeezed out underneath. 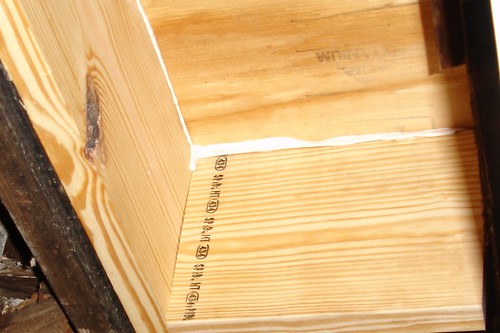 Hopefully the next update won’t wait quite as long as this one did. Now that things are coming back together, I hope to have a lot more pictures to share.

This entry was posted 12 years, 2 months ago. and is filed under Bathroom Remodel, Home Ownership. You can follow any responses to this entry through the RSS 2.0 feed. Both comments and pings are currently closed.